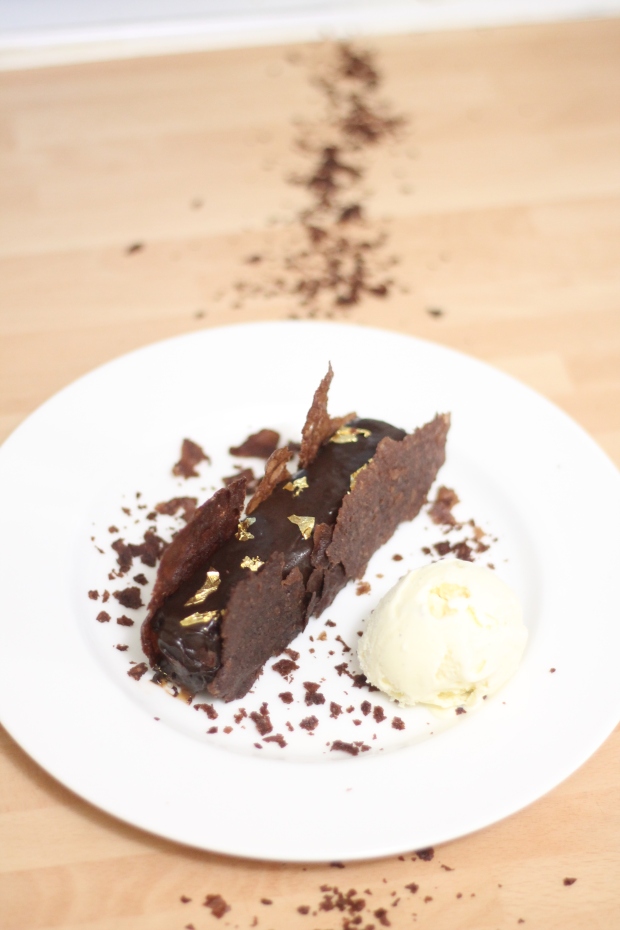 People are surprised to learn that I don’t watch a lot of cooking television these days, but four years ago when I was in Sydney I had a real soft spot for Masterchef Australia. One episode had contestents running around New York to cook three different dishes from three different multi-Michelin starred restaurants. This challenge was the first time I ever heard of Paul Liebrandt or ever saw Gold Bar, and it’s been stuck on my mind ever since.

The recipe was never revealed on the show, not even if you pause the video and advance it frame by frame, but I did find a blog post by a kindred (ie: lunatic) spirit who had tried to recreate the dish from the list of its elements. Gold bar is:

My first try at making it, I skipped the last two elements in favour of creating just an enrobed chocolate slice. And it tasted good – it tasted very good, but no prospector is satisfied with a pan full of iron pyrite when they know there’s gold in the stream.

Of all the hurdles to success with this dish, the glacage looms three or four times higher than every other. The final goal is a surface so smooth, black and shiny that you can actually see your face in it. That’s not an exagguration. To get this perfect, lumpless, ripple free finish requires a quick yet patient hand with an all-too-rapidly cooling bowl of the pitch-black chocolate glaze.

For the second try, I already had a number of improvements in mind. The original quantities for the salt caramel layer were to be doubled. The biscuit presse base was to become an almond shortbread. This second try would be a disaster – I ended up smushing the whole lot into a tub of vanilla ice cream and ruefully eating my failure scoop by scoop. What had gone wrong? Well, in the baking, the shortbread had pulled away from the sides of the tin by a millimeter or two, whereas the pressed layer of biscuit crumbs had reached all the way to the edge and formed a caramel-tight seal. The double quantity of caramel therefore had been given plenty of space to leak out, slip under the pastry and thence through bottom of the loose-based tin, the wire shelf of the fridge and into the leftovers of the previous night’s chicken curry (which I’m ashamed to say did not get thrown away).

Presse biscuit crumb base – most familiar from a cheesecake. Take a big pile of crumbs and mix them with melted butter or chocolate to make them stick together. Roll it firmly with a rolling pin between two sheets of baking paper, and then hope you can get it into the tin in one piece without turning back into a billion crumbs. Smush extra crumbs right into the edges of the cake tin with your fingertips. Liebrant’s recipe lists sucree and feuillitine crumbs as ingredients. I didn’t know what either were and had to look it up. Sucree is sweet shortcrust pastry – I baked an almondmeal one just to crumble it to pieces. Feuillitine is the delicate, brittle, sugarcone-like crumbs of crushed up crepe dentelle.  You can buy it on Amazon, or just use the crumbs off the chocolate crepe dentelles that you’re making for the fifth element.

Crepe Dentelles. Halfway between pastry and sugarwork, these thin, brittle sheets are beautiful, ethereal, and tedious as hell to make. Do them well in advance. Keep from snacking on them by reminding yourself you don’t want to have to make another batch.

The third time I made gold bar I had Liebrant’s actual recipe, from his just-released food memoir To The Bone. Not a cookbook per se, but it does have a few of his recipes – a third of the way through I see “Gold Bar, recipe p234” and it was all of fifteen seconds later that I’d decided I’d be serving it for my Valentine’s day supper club. I hadn’t planned to bother with gold leaf, but idly checking the price on Amazon I found it was surprisingly affordable. It also makes such a difference to this dessert, even though it tastes of nothing. Not only does it give the dish its name, it also has a huge effect on people’s perception of value – big wow factor. But perhaps most helpfully, any little bumps, bubbles or ripples on the top of the glacage mirror iciing can be strategically covered by a fleck of gold, just as the upright crepe dentelles hide a multitude of sins around the edges of the bar. 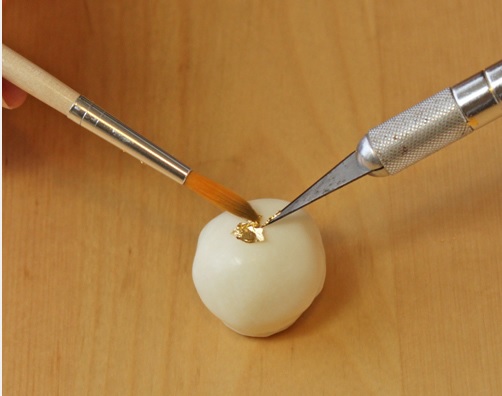 Gold leaf is made by hammering a piece of gold to a thickness about a thousand times finer and lighter than anything you’ve ever had experience of. Which makes it a little tricky to work with. Imagine an infinitely thin square of tissue paper covered in glue. You can’t cut it per se because gold leaf sticks to anything, but you can rip off teeny portions between the tips of your pointiest knives as long as you take very shallow breaths. [Photo Credit]

The fourth time, for the May supper club, I didn’t change much except the shape – a little longer and thinner, and the caramel into a salted fudge which I hoped would allow me to have more of it as, being thicker, it wouldn’t run away so easily. Unfortuantely I was completely wrong on that score. The fudge set thick and solid when it went on, but the chocolate cremeaux layer on top of it rehydrated the fudge and made it runny. My biscuit base kept it in the tin, but now my dessert consisted of a biscuity thing and a set chocolate thing with a layer of salt-caramel lubricant between them and nothing to hold them together. Suffice to say, the solution to this mess was less than perfect and involved toothpicks, structural dentelles and a long, tedious time getting the glacage on. Next time I plan to try painting on a layer of tempered chocolate before the cremeaux – a kind of edible ship’s pitch to waterproof the caramel.

Overall, I’ve had a real journey with this dessert and it’s not over yet. Every time I cook it I learn something new – usually by making some sort of horrible mistake. I’ve gained an appreciation for the dish that I didn’t have just from seeing it on tv. I love how, even though it’s a high-class, expensive dessert with punishingly precise presentation, it still has design elements that make it easier and more practical. The decorations – the gold leaf and the crepe dentelles, can cover up a imperfect glacage job, while the crumbs from the dentelles can go into the base. You may also notice in some of the the photos a sprinkling of chocolate feuillitine crumbs – they went on the plate as a last minute addition to quickly hide a couple of chocolate smears, but actually look better than if I’d been perfect the first time. I genuinely think that the first time I make Gold Bar perfectly will be the last time I ever make it. But I’ve still got a way to go.

Putting the bars to bed, 4am.